News and discussion about Alter Bridge. Get the latest updates here!
385 posts

im reaaaal excited for this article. first real insight musically into the album 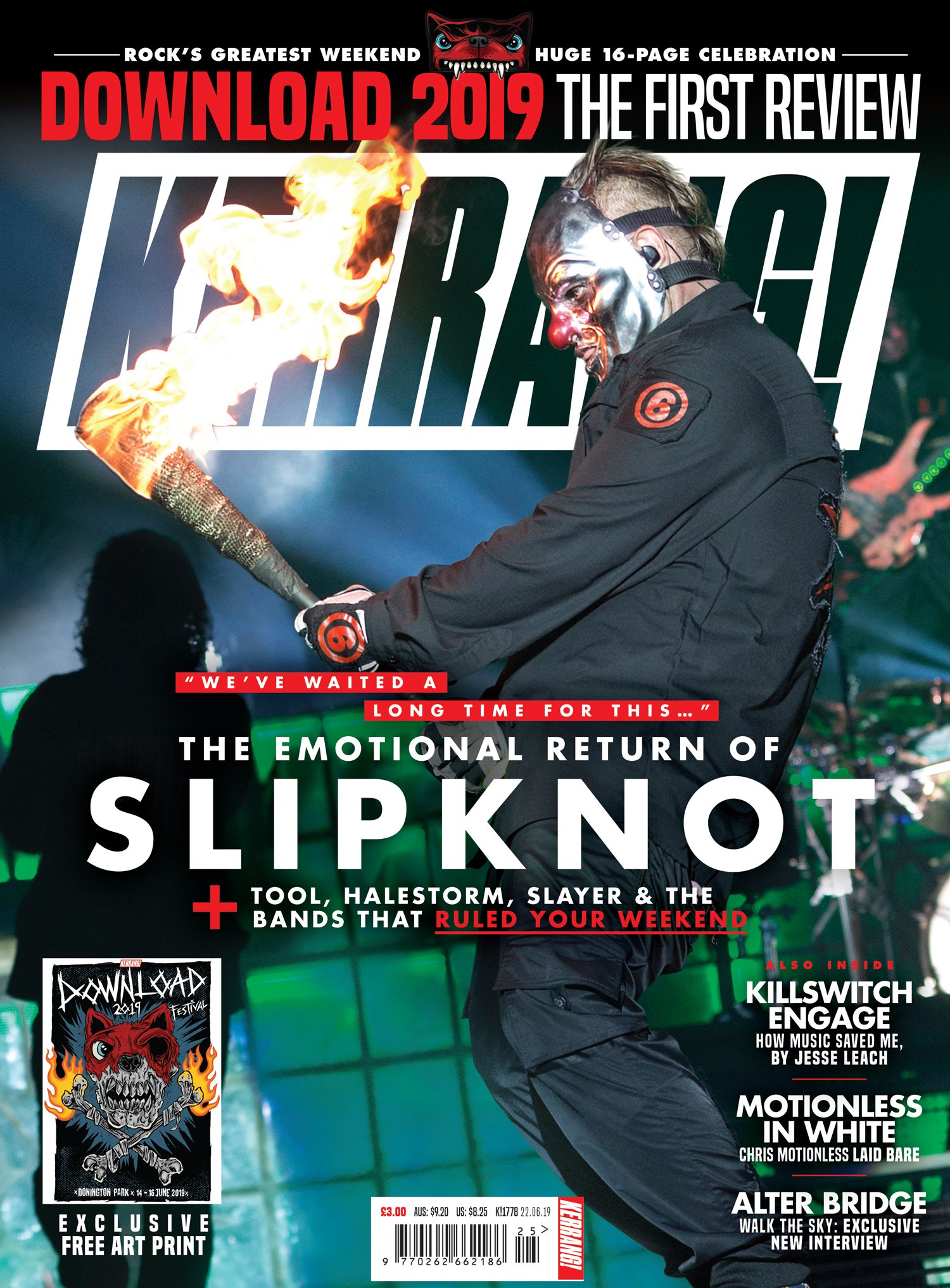 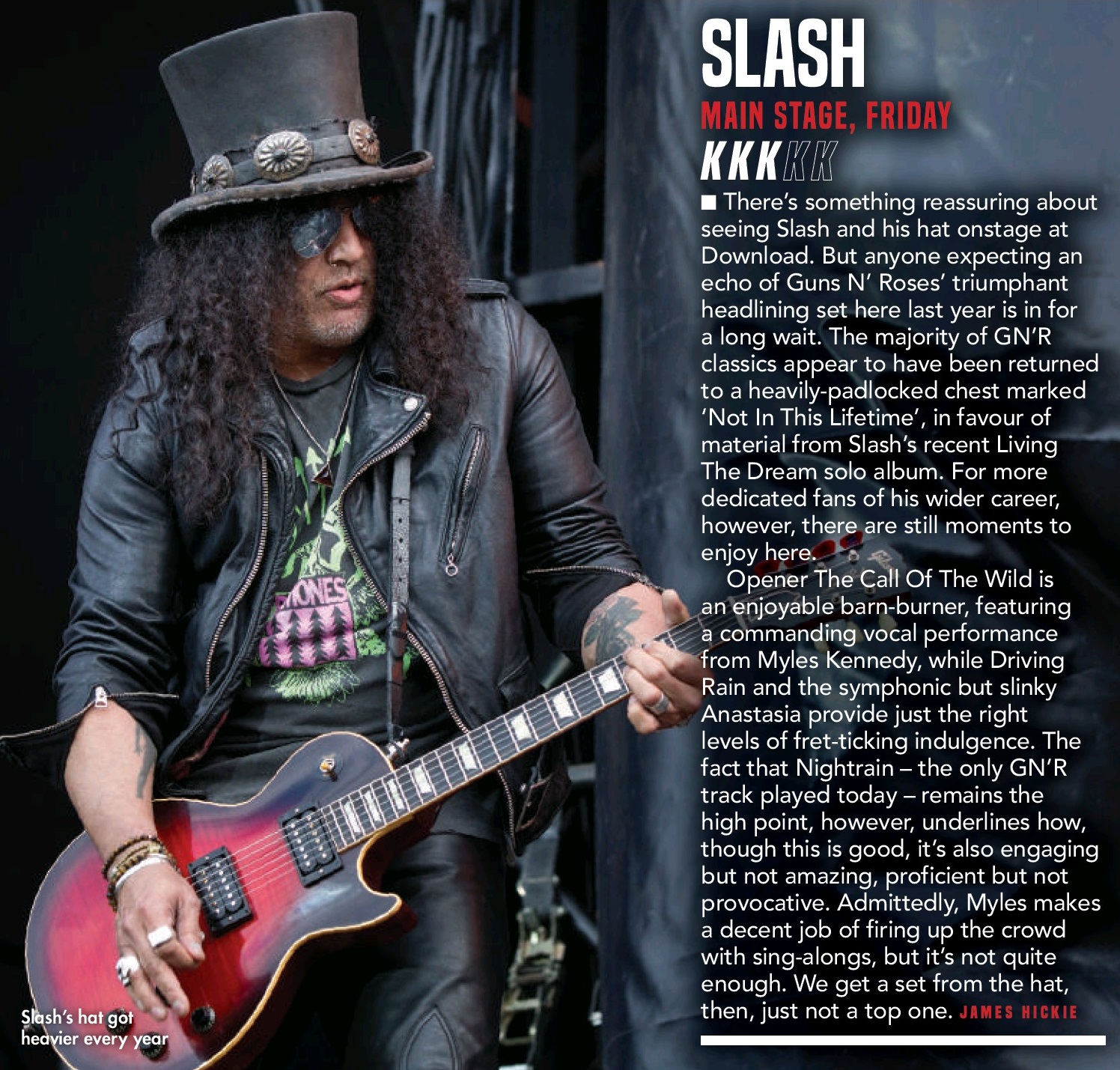 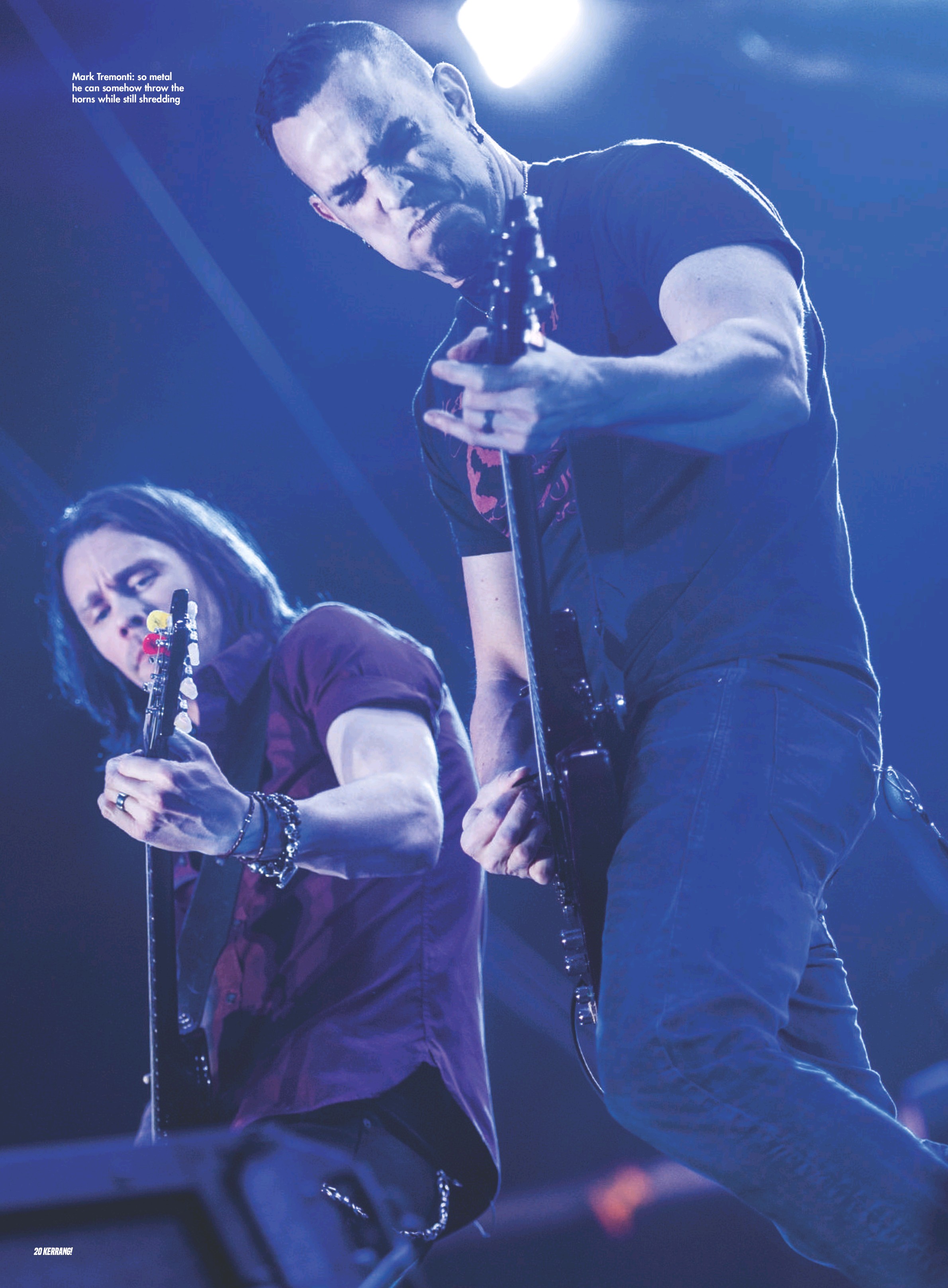 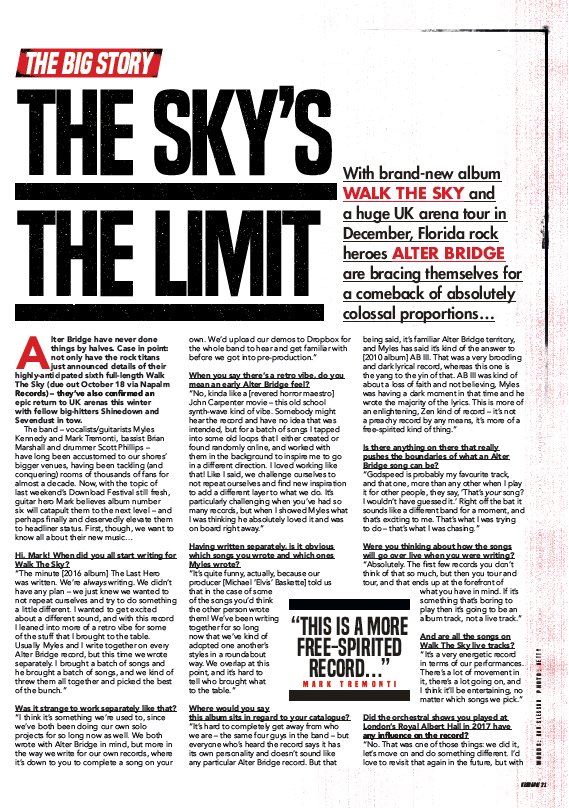 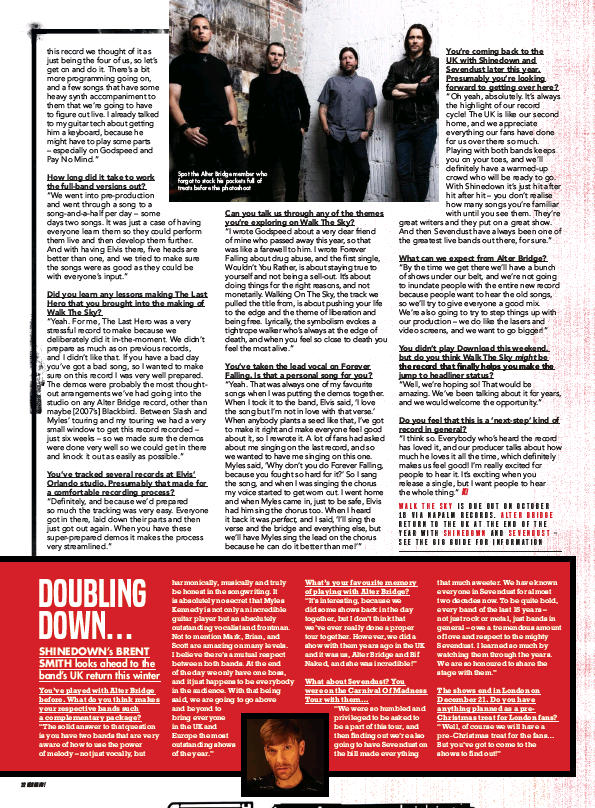 THE SKY’S THE LIMIT

With brand-new album WALK THE SKY and a huge UK arena tour in December, Florida rock heroes ALTER BRIDGE are bracing themselves for a comeback of absolutely colossal proportions…

Alter Bridge have never done things by halves. Case in point: not only have the rock titans just announced details of their highly-anticipated sixth full-length Walk The Sky (due out October 18 via Napalm Records) – they’ve also confirmed an epic return to UK arenas this winter with fellow big-hitters Shinedown and Sevendust in tow.

The band - vocalists/guitarists Myles Kennedy and – Mark Tremonti, bassist Brian Marshall and drummer Scott Phillips – have long been accustomed to our shores’ bigger venues, having been tackling (and conquering) rooms of thousands of fans for almost a decade. Now, with the topic of last weekend’s Download Festival still fresh, guitar hero Mark believes album number six will catapult them to the next level – and perhaps finally and deservedly elevate them to headliner status. First, though, we want to know all about their new music…

Hi, Mark! When did you all start writing for Walk The Sky?

“The minute [2016 album] The Last Hero was written. We’re always writing. We didn’t have any plan – we just knew we wanted to not repeat ourselves and try to do something a little different. I wanted to get excited about a different sound, and with this record I leaned into more of a retro vibe for some of the stuff that I brought to the table. Usually Myles and I write together on every Alter Bridge record, but this time we wrote separately. I brought a batch of songs and he brought a batch of songs, and we kind of threw them all together and picked the best of the bunch.”

Was “I think it strange it’s something to work we’re separately used to, like since that?

we’ve both been doing our own solo projects for so long now as well. We both wrote with Alter Bridge in mind, but more in the way we write for our own records, where it’s down to you to complete a song on your own. We’d upload our demos to Dropbox for the whole band to hear and get familiar with before we got into pre-production.”

When you say there’s a retro vibe, do you mean an early Alter Bridge feel?

“No, kinda like a [revered horror maestro] John Carpenter movie – this old school synth-wave kind of vibe. Somebody might hear the record and have no idea that was intended, but for a batch of songs I tapped into some old loops that I either created or found randomly online, and worked with them in the background to inspire me to go in a different direction. I loved working like that! Like I said, we challenge ourselves to not repeat ourselves and find new inspiration to add a different layer to what we do. It’s particularly challenging when you’ve had so many records, but when I showed Myles what I was thinking he absolutely loved it and was on board right away.”

Having written separately, is it obvious which songs you wrote and which ones Myles wrote?

“It’s quite funny, actually, because our producer [Michael ‘Elvis’ Baskette] told us that in the case of some of the songs you’d think the other person wrote them! We’ve been writing together for so long now that we’ve kind of adopted one another’s styles in a roundabout way. We overlap at this point, and it’s hard to tell who brought what to the table.”

Where would you say this album sits in regard to your catalogue?

“It’s hard to completely get away from who we are – the same four guys in the band – but everyone who’s heard the record says it has its own personality and doesn’t sound like any particular Alter Bridge record. But that being said, it’s familiar Alter Bridge territory, and Myles has said it’s kind of the answer to [2010 album] AB III. That was a very brooding and dark lyrical record, whereas this one is the yang to the yin of that. AB III was kind of about a loss of faith and not believing, Myles was having a dark moment in that time and he wrote the majority of the lyrics. This is more of an enlightening, Zen kind of record – it’s not a preachy record by any means, it’s more of a free-spirited kind of thing.”

Is there anything on there that really pushes the boundaries of what an Alter Bridge song can be?

“Godspeed is probably my favourite track, and that one, more than any other when I play it for other people, they say, ‘That’s your song? I wouldn’t have guessed it.’ Right off the bat it sounds like a different band for a moment, and that’s exciting to me. That’s what I was trying to do – that’s what I was chasing.”

Were you thinking about how the songs will go over live when you were writing?

“Absolutely. The first few records you don’t think of that so much, but then you tour and tour, and that ends up at the forefront of what you have in mind. If it’s something that’s boring to play then it’s going to be an album track, not a live track.”

And are all the songs on Walk The Sky live tracks?

“It’s a very energetic record in terms of our performances. There’s a lot of movement in it, there’s a lot going on, and I think it’ll be entertaining, no matter which songs we pick.”

Did the orchestral shows you played at London’s Royal Albert Hall in 2017 have any influence on the record?

“No. That was one of those things: we did it, let’s move on and do something different. I’d love to revisit that again in the future, but with

“THIS IS A MORE FREE-SPIRITED RECORD…” MARK TREMONTI

You’ve played with Alter Bridge before. What do you think makes your respective bands such a complementary package?

“The solid answer to that question is you have two bands that are very aware of how to use the power of melody – not just vocally, but harmonically, musically and truly be honest in the songwriting. It is absolutely no secret that Myles Kennedy is not only an incredible guitar player but an absolutely outstanding vocalist and frontman. Not to mention Mark, Brian, and Scott are amazing on many levels. I believe there’s a mutual respect between both bands. At the end of the day we only have one boss, and it just happens to be everybody in the audience. With that being said, we are going to go above and beyond to bring everyone in the UK and Europe the most outstanding shows of the year.”

What’s your favourite memory of playing with Alter Bridge?

“It’s interesting, because we did some shows back in the day together, but I don’t think that we’ve ever really done a proper tour together. However, we did a show with them years ago in the UK and it was us, Alter Bridge and Bif Naked, and she was incredible!”

What about Sevendust? You were on the Carnival Of Madness Tour with them…

“We were so humbled and privileged to be asked to be a part of this tour, and then finding out we’re also going to have Sevendust on the bill made everything that much sweeter. We have known everyone in Sevendust for almost two decades now. To be quite bold, every band of the last 15 years – not just rock or metal, just bands in general – owe a tremendous amount of love and respect to the mighty Sevendust. I learned so much by watching them through the years. We are so honoured to share the stage with them.”

The shows end in London on December 21. Do you have anything planned as a prechristmas treat for London fans?

“Well, of course we will have a pre-christmas treat for the fans… But you’ve got to come to the shows to find out!”

Super excited about the synths!

Oh man does that article have me excited to hear the CD now. It's going to be a looooong 4 month wait!

And if you fall, at least you tried
As you tremble on the wire...

Wow thanks! That was a cool read!

Huh, they went in unprepared for TLH. Makes sense.

AB4Lyfe wrote:Huh, they went in unprepared for TLH. Makes sense.

Relatively unprepared, not totally unprepared. They had a similar process for Fortress I think, which was a great album as well (I happen to think TLH was really good as well, but that doesn’t seem the consensus here). It was all about that pre-pro moment and catching lightning in a bottle.
Curious to see what the new method brought to the table! 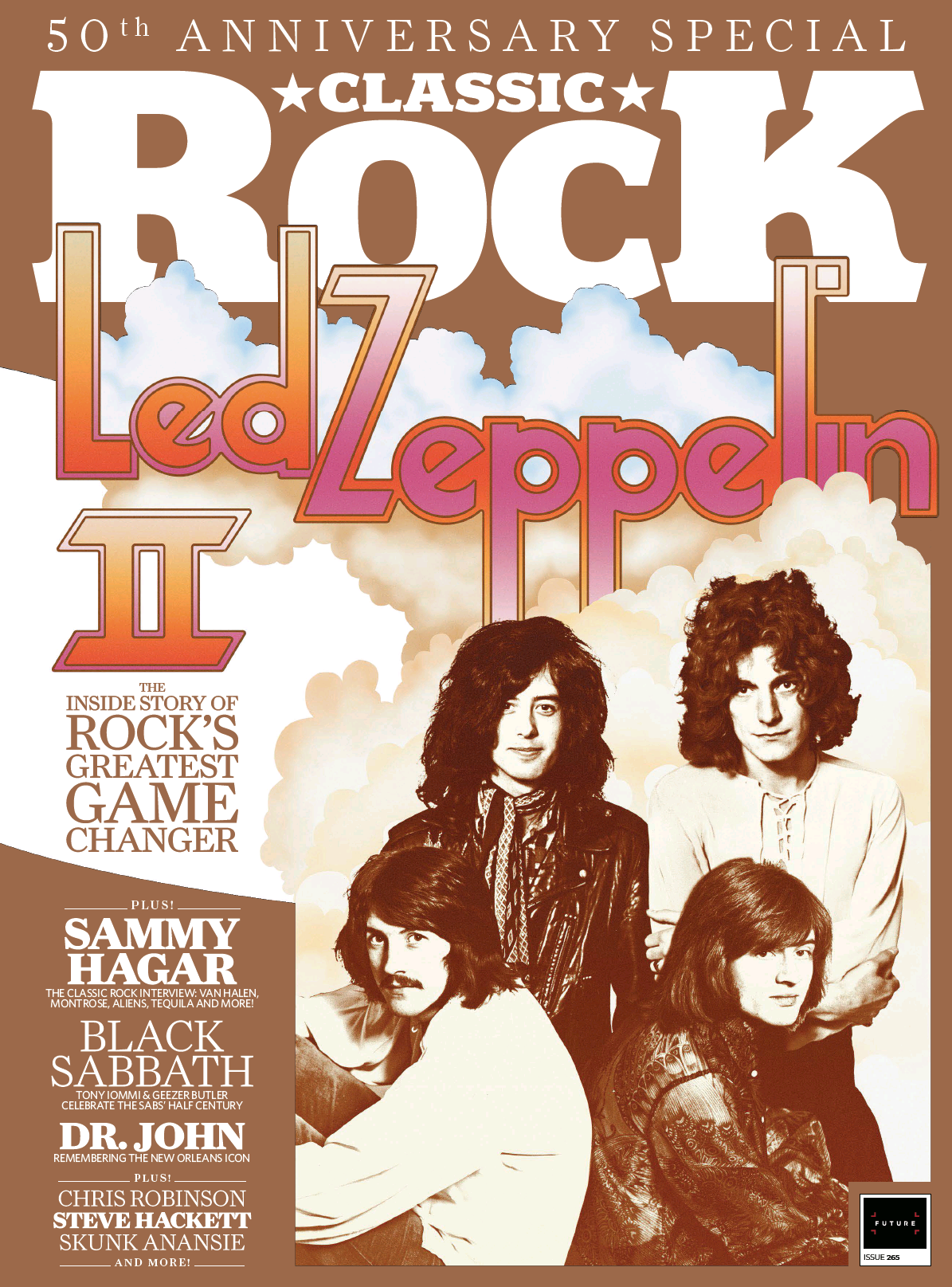 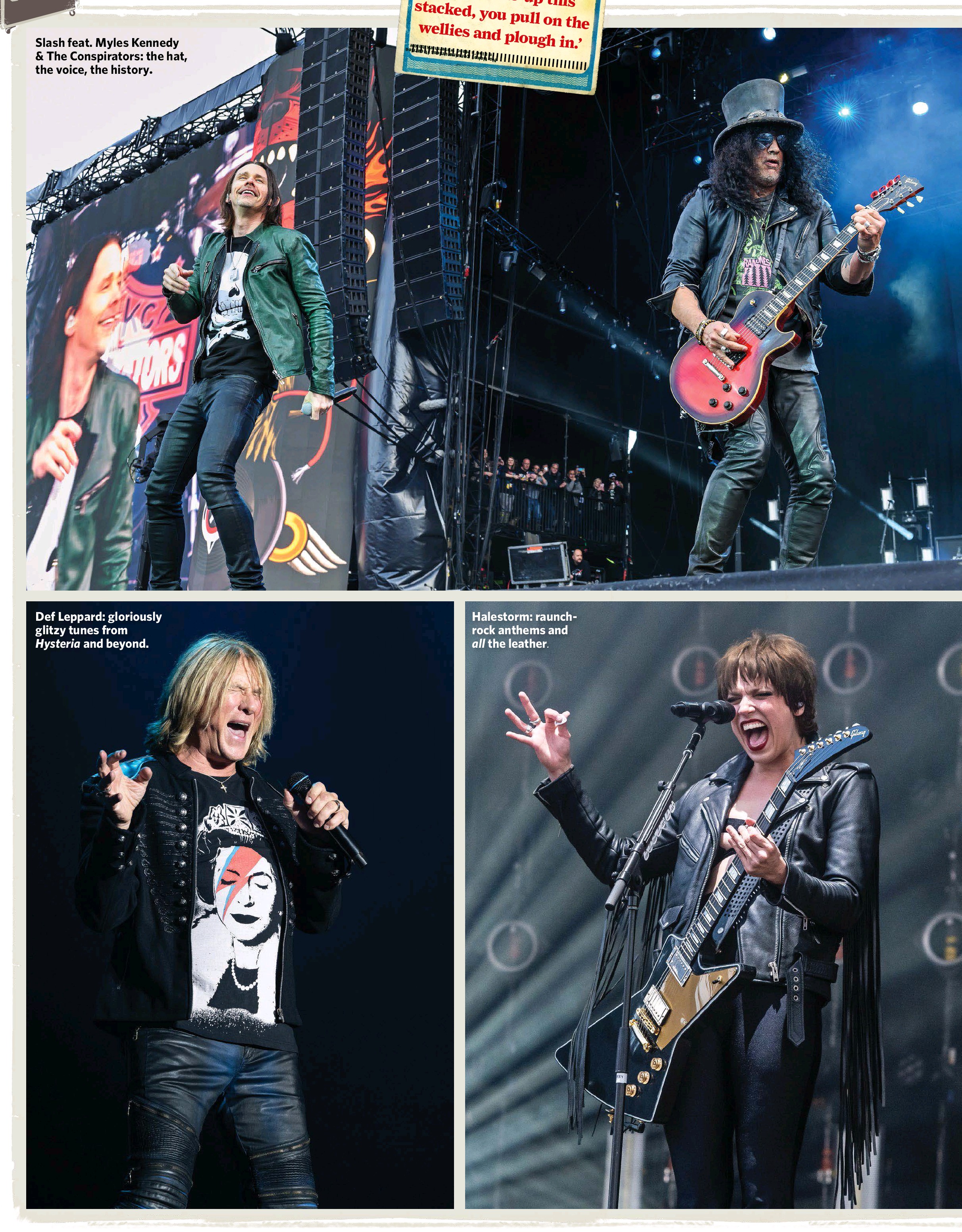 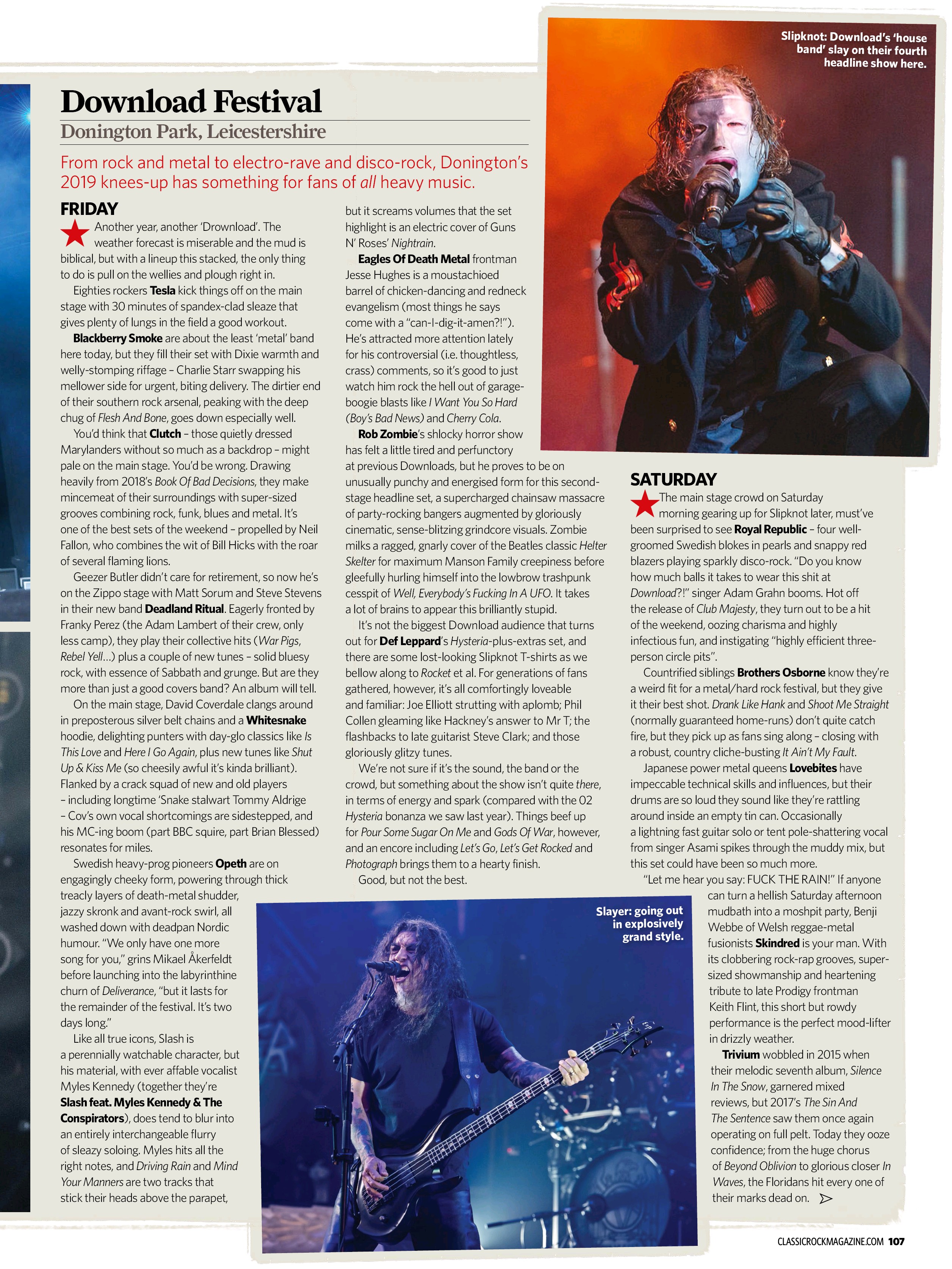 Wow, that’s not the best of reviews

For Slash it isnt, though Myles gets a pass.. which he should.. and cant say i disagree with the sentiment regarding a lot of the slash tunes being thirteen a dozen... 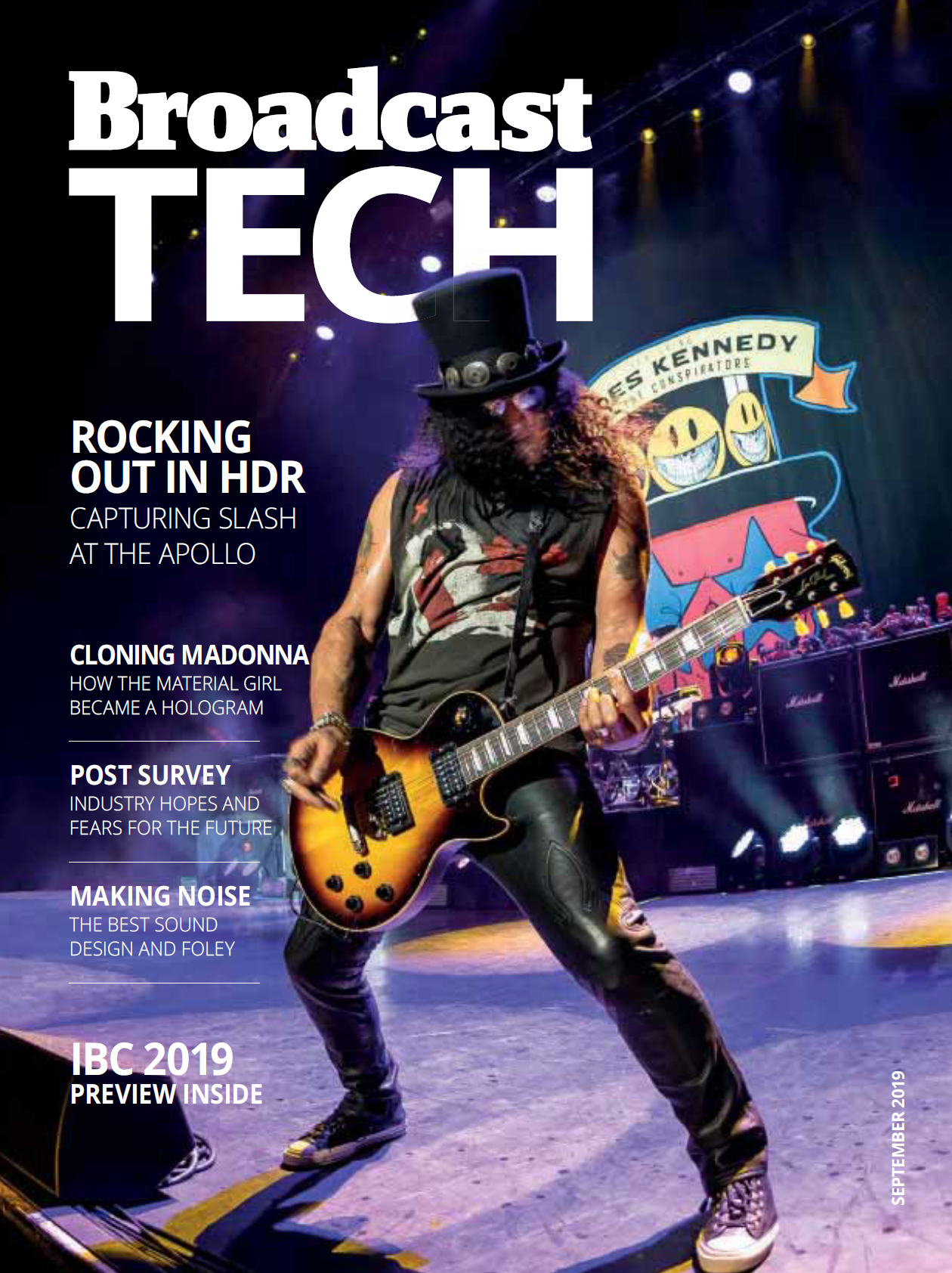 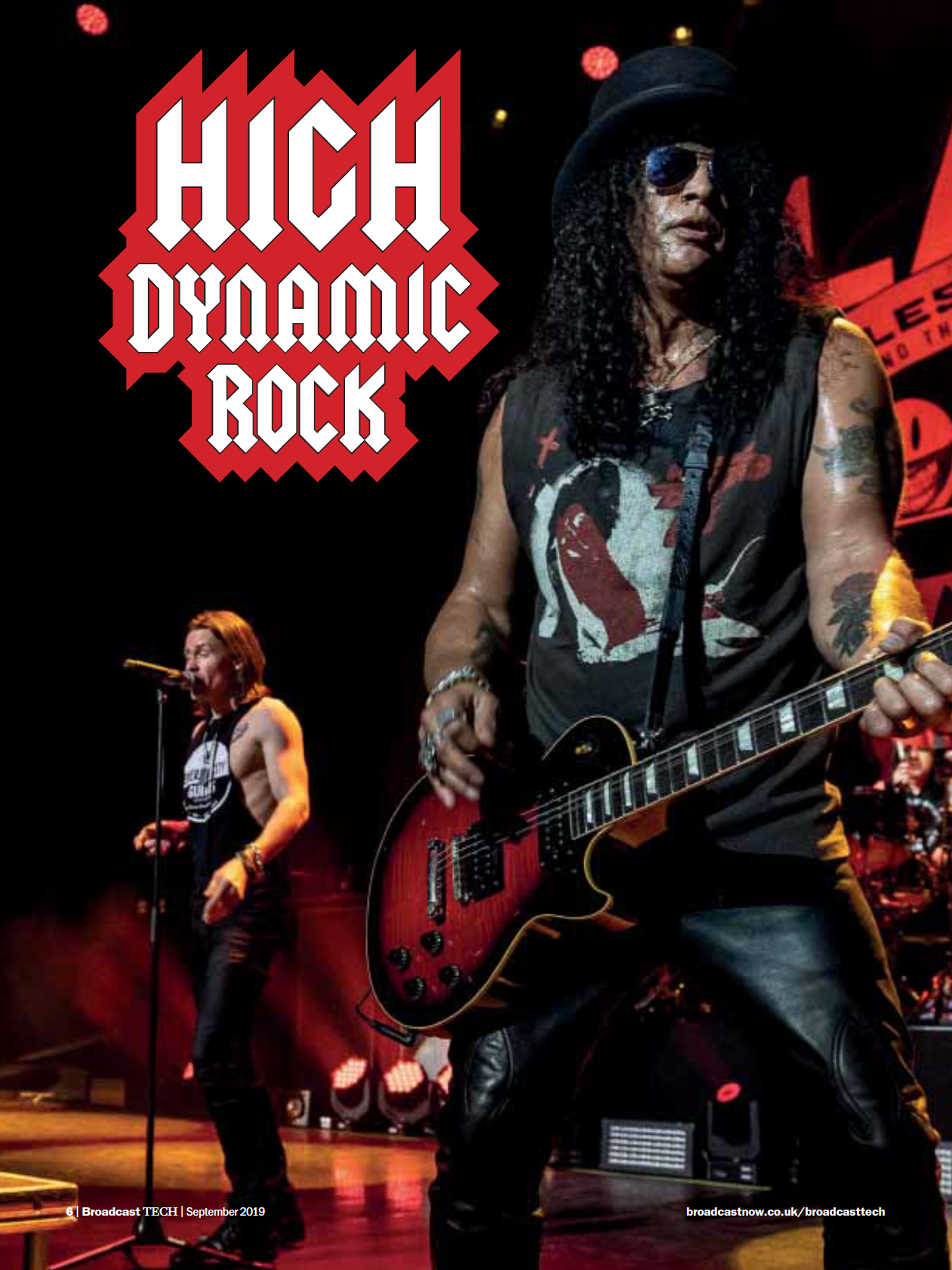 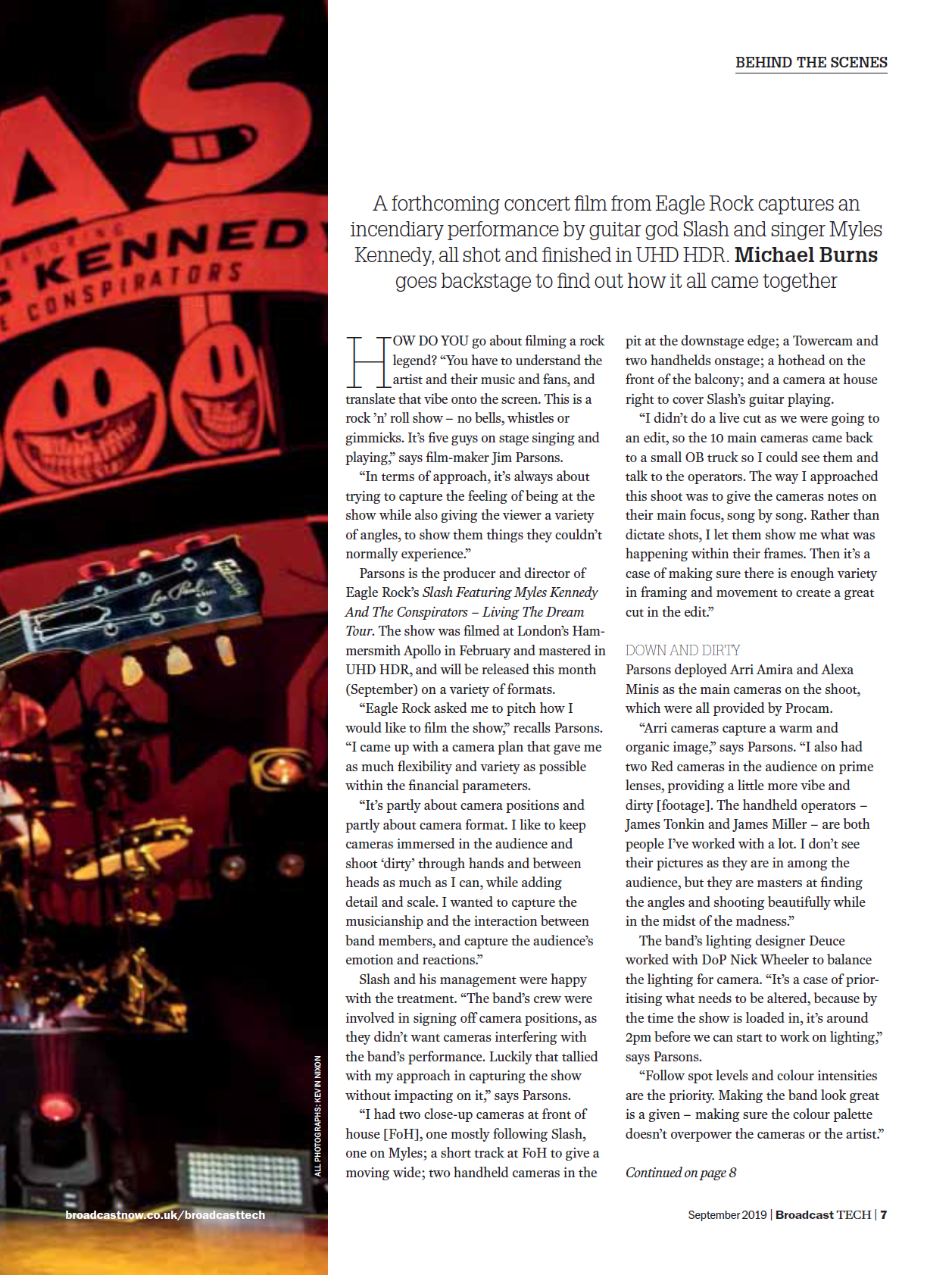 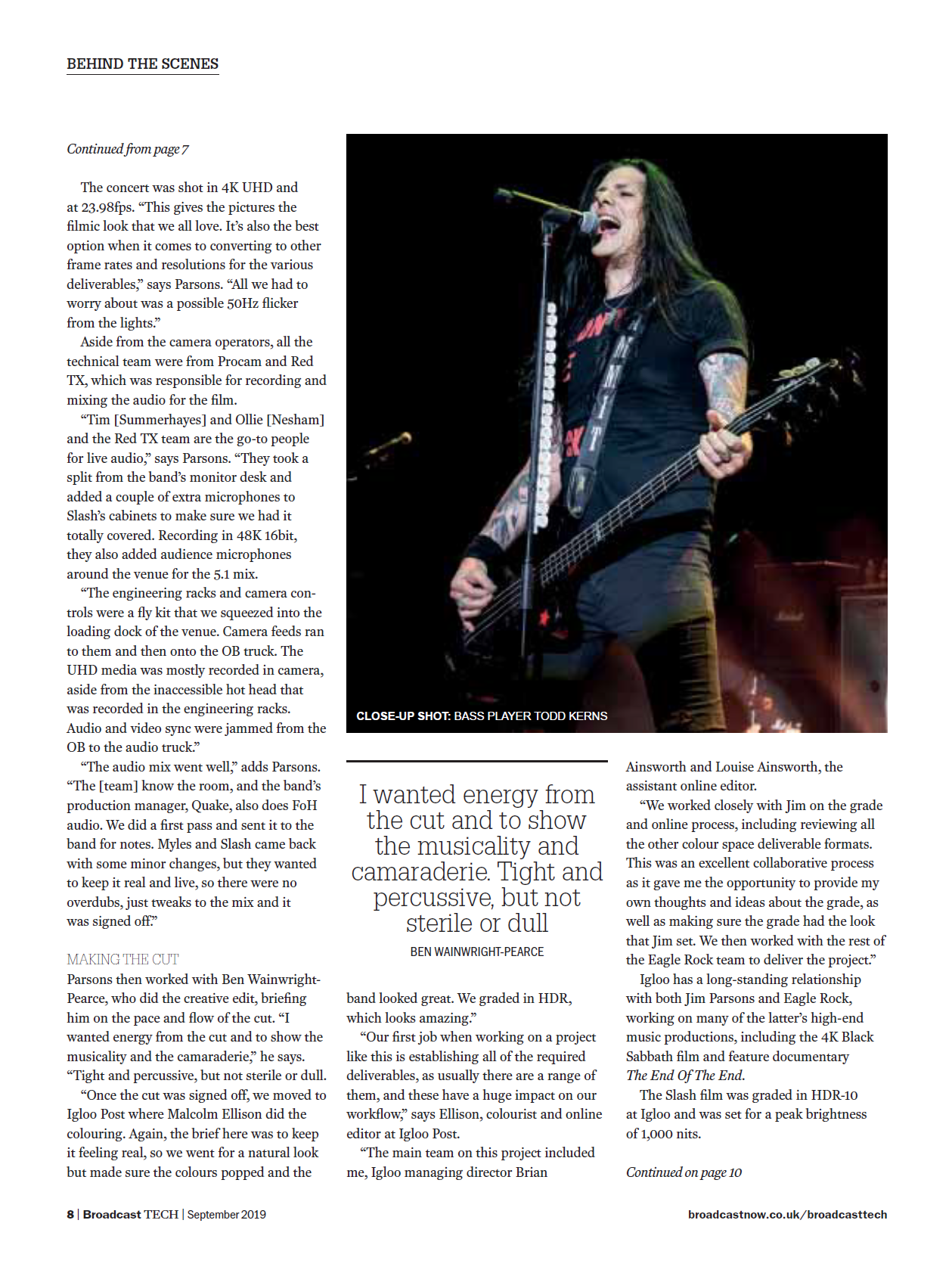 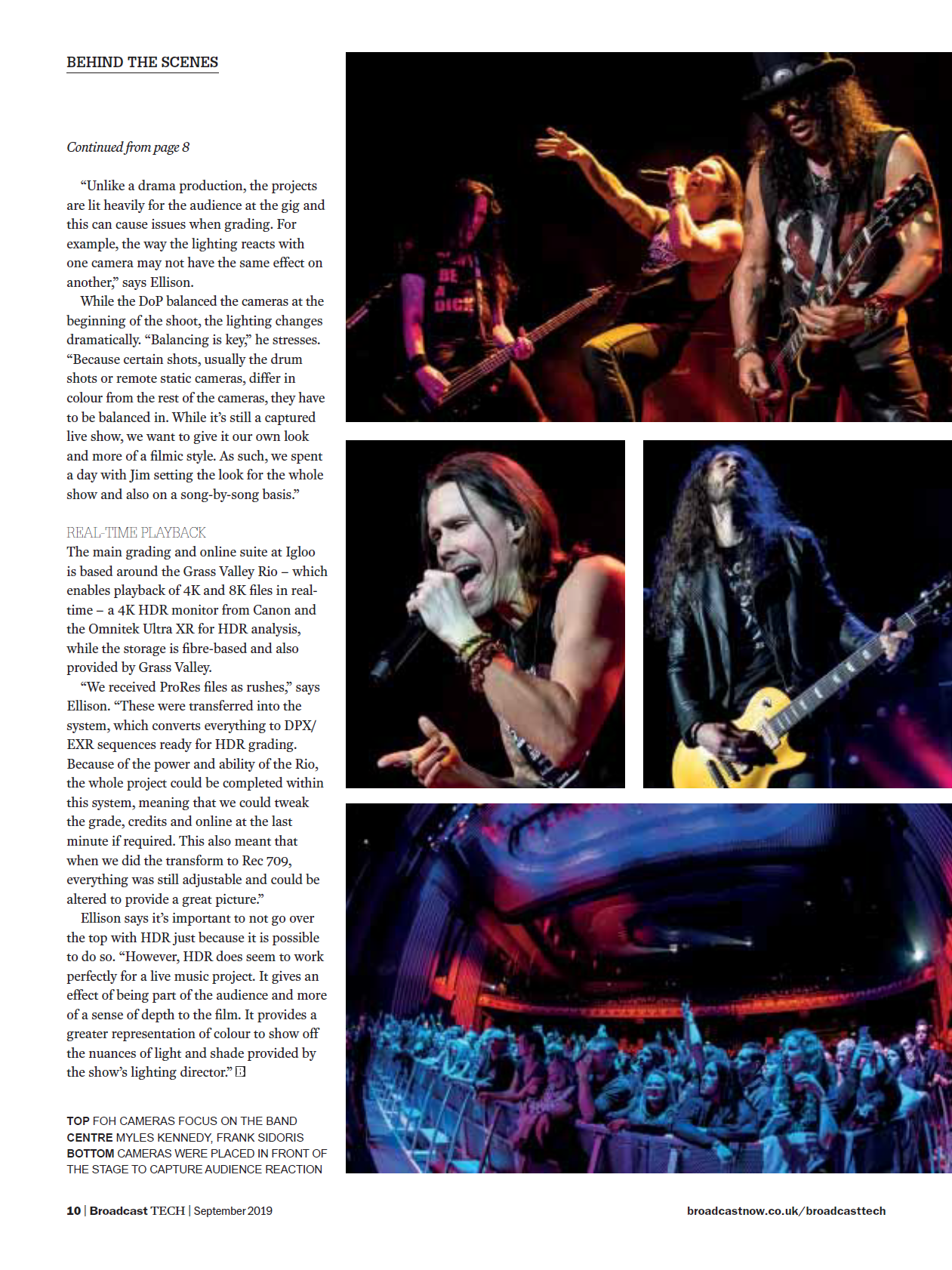 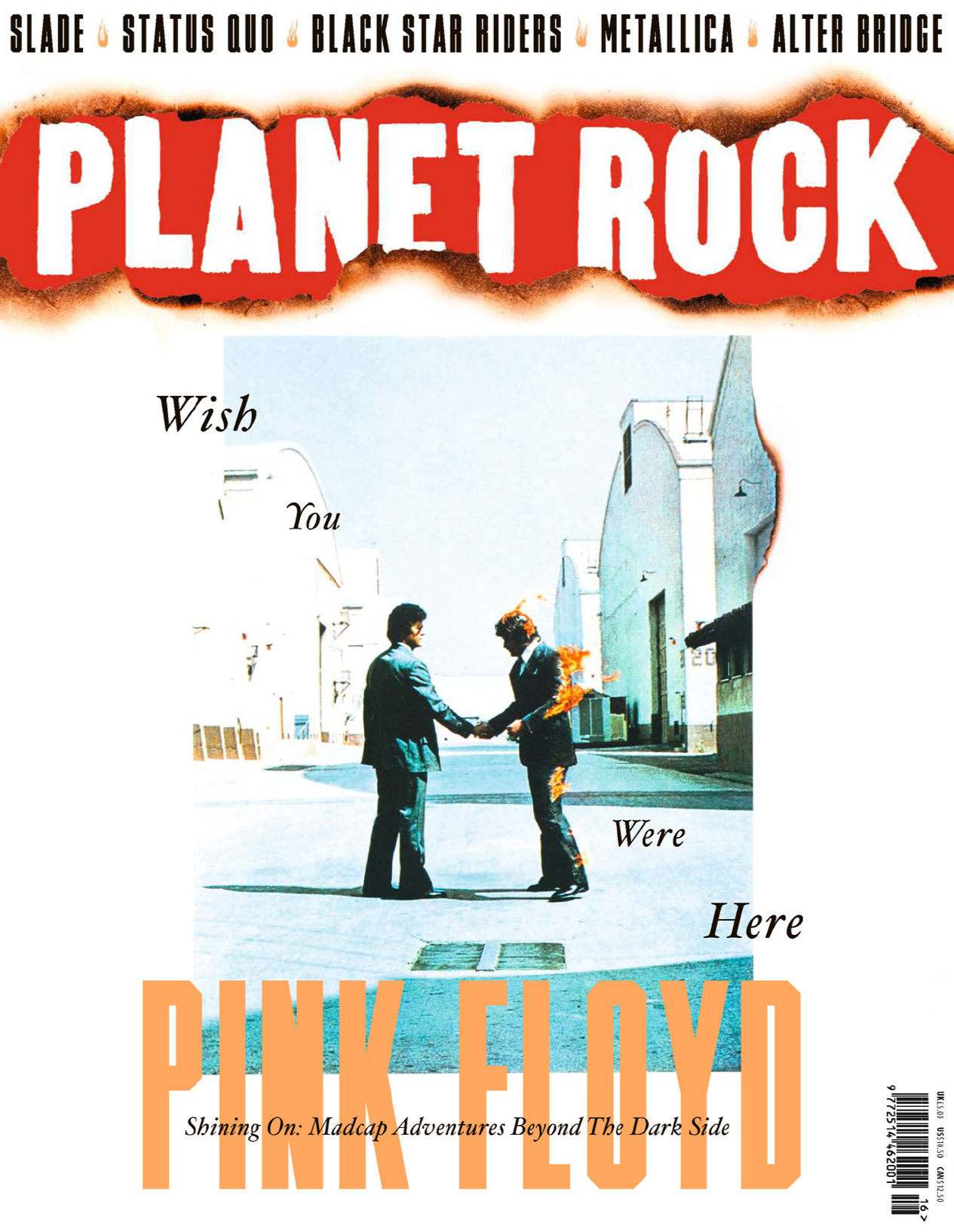 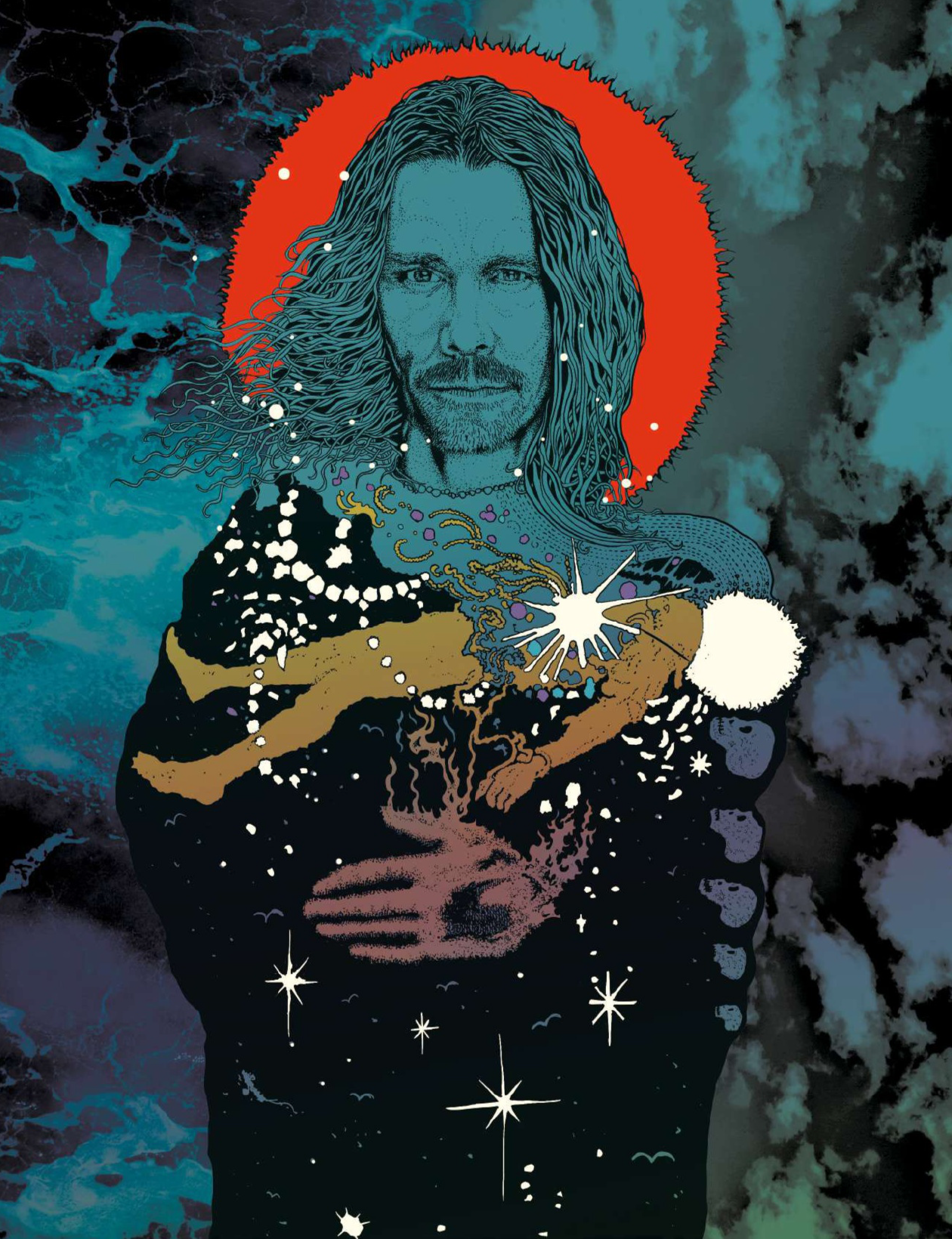 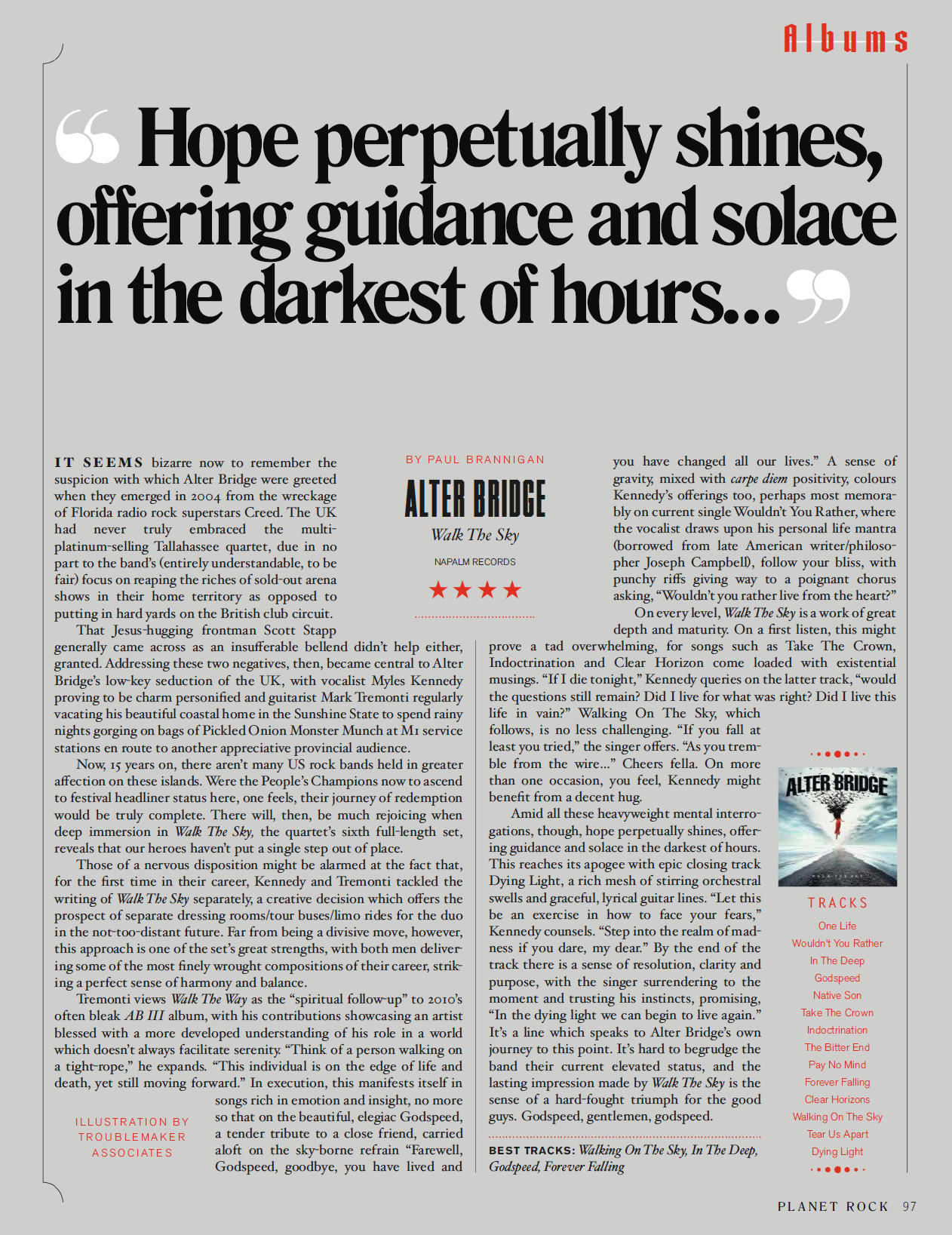 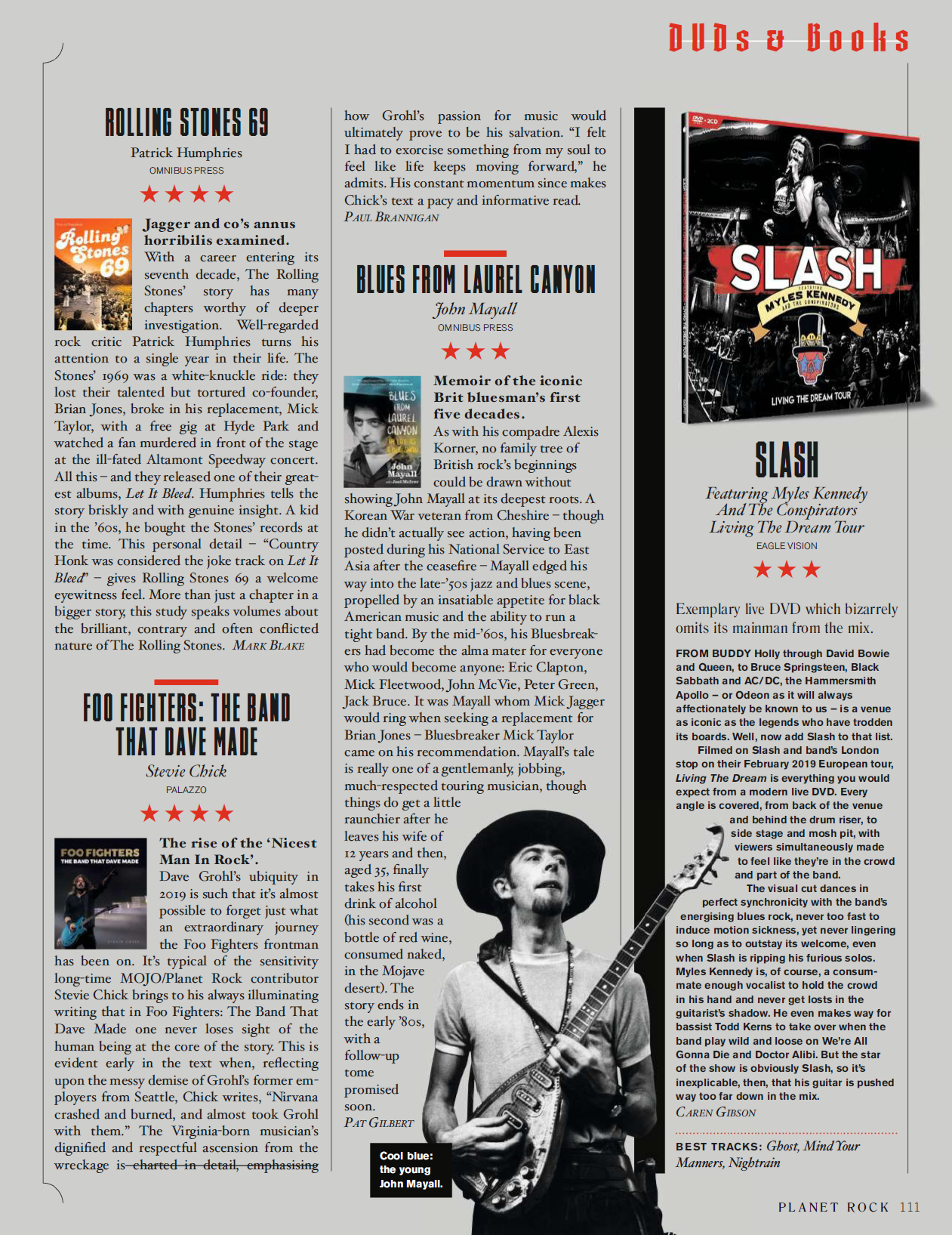 It'll be cool to hear Alter Bridge interview Alice Cooper and Slipknot. They're always adding to the skillset.

Glad to see that the best tracks mentioned in that review are expectedly, not the singles! AB23 wrote:It'll be cool to hear Alter Bridge interview Alice Cooper and Slipknot. They're always adding to the skillset.

I don't know whether to be shocked that anyone took that post seriously, or whether I should just continue being disappointed.